Looking For Turtles (LFT) is a custom "Looking for Group (LFG)" or "Dungeon Finder" alternative, made for Turtle-Wow.

What it does NOT do[] 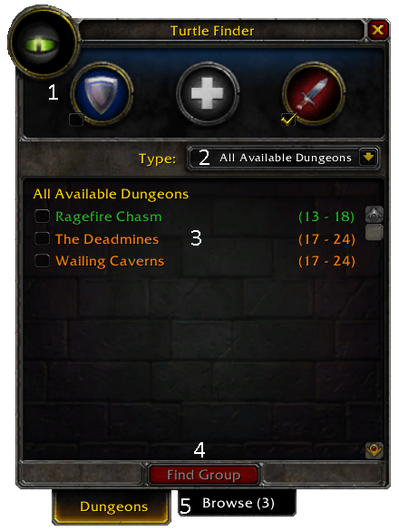 The UI is brought up by clicking an Eye button which is situated around player's minimap. The button is moveable.

Main window of the LFT consists of:[]

Browser tab allows player to browse groups that are currently in the process of forming. This tab will only show Dungeons player is eligible for.

In order to register themselfs for the dungeon players have to:

Alternatively players could, after choosing their role, go to the Group Browser and chech it for avalable groups. If there are avalable slots, player can use "Join as X" button to join that specific dungeon search as a X Role.

After enough players will register for the chosen dungeon player will be greeted by "Ready Chech" confirmation Window, which requires them to confirm their readiness. Group will be automaticaly formed after all players confirm that they are ready .

Community content is available under CC-BY-SA unless otherwise noted.
Advertisement